“Woah, that improv show sure was scary!” Is generally NOT a welcome review for an improv show but, luckily, it’s the perfect review for a show I saw this past weekend, so you can all calm down.

I love improv. I love scary things (such as books by Stephen King). So you can only imagine my excitement when I heard about a show that combines the two! Improvisational Repertory Theatre Ensemble (iRtE) has fashioned a completely unique improv show catered to those of us who seek the spooky!

Here’s a video to properly introduce you to “The Scary”

The show playfully… or should I say “eerily”… (is there a word that combines both playful and eerie? ‘Cause that word would perfectly describe this moment. Plaerily? Yes. Plaerily.)
The show “plaerily” begins by asking the audience to reach into the mind of Stephen King for a story. While holding a brain-decorated box, Nannette Deasy, who is seemingly the “brains” of the operation, whispers, “Mr. King couldn’t be here – entirely” as she brings the box to an unsuspecting victim. The victim, being a shy audience member, picks the first category: the story!
To have a proper Stephen King improvisation, iRtE needs three suggestions to start: a story, a character, and a location. For example, on the night I attended, the suggestions were as follows: Story: An unpopular girl with supernatural abilities, Character: An evil pet, and Location: A Post Apocalyptic Wasteland. How fun!
The improv group had really fun ways to generate audience suggestions. With such a unique show the suggestions must be specific, so, the group used many creepy pun-filled tools such as a deck of evil cards and a spinning wheel of misfortune!

Once all the suggestions were in place, iRtE was able to let loose and have fun telling the story, the long-form improv way. The ensemble has a wit that made much of the show quotable. One of my favorite lines came near the end when Nannette’s evil cat character said “cat’s are nature’s little cereal killers!” Oh, I died of laughter at that one. Another fun moment was when the ensemble did a bit that I will call “what she’s actually thinking.” It happened when Marcia’s preppy character was convincing Graceann’s Carrie-like character to go to prom. Marcia would say something and another ensemble member would immediately call out what she was actually thinking. For example, Marcia said, “You can go far!” and what she was actually thinking was called out as “You can go fuck yourself!” It’s moments like this that make for hilarious improv, my friends.

Most members seemed to really be listening and having fun, and that’s what’s really important.

“The Scary” also uses technical enhancements unique to this improv setting! Enhancements such as ominous music, plaerie(playful/eerie again) masks, and my personal favorite, Stage Blood! So much blood! These added so much to the show it’s unreal.

The middle of the show showcased a singer/songwriter named Craig Greenberg. A talented musician who played intimately for the audience. It was a welcome surprise to hear him play mid-improv.

If you’re looking for a good night of fun, definitely check out iRtE! And don’t be shy to join the cast for a drink after the show. 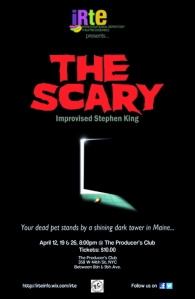 I apologize for my low quality pictures. I was far away and used my Iphone. It’s much less fuzzy in real life… kind of.

Horris the Bunny, who was once a 6-foot tall man. (Curt Dixon)